A STORY ABOUT SNARF'S UNLIMITED ENERGY

Snarf came to live with us at the age of 9 weeks, a real change from the warm litter of 8 brothers and sisters, crawling in the straw of an old churn on a monumental farm.  Around the churn were regularly the farmer's children playing with the dogs and of course mother dog which was very busy looking after her puppies and her job as a cow driver.
Despite all good care, Snarf was very badly socialized.  Scared of each strange noise, cars, bicycles, even the sound of the lawnmower or a sweeping broom frightened him.  So we went to puppy training and afterwards obedience training, where he was, despite all his fears, the best pupil.  Of course, it is a border collie! 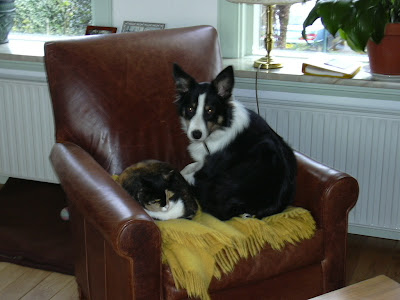 Often, it takes long before a border collie is mentally grown up.  They are full of mischievous and naughty tricks.  Within the boundaries of our house and garden is much allowed, juping on the couch, jumping up at us, running around the garden on the lawn on his own created muddy racecourse.  But there are limits!  He is not allowed in the flowerborders, chasing cats and so on.  Fear of cars was turned in trying to stop cars, motors, bycicles and runners, very dangerous!  This should be nipped in the bud and we succeeded very soon by training and consequence, but it was not all that easy.  Nowadays we can take him everywhere we go, without any problem. 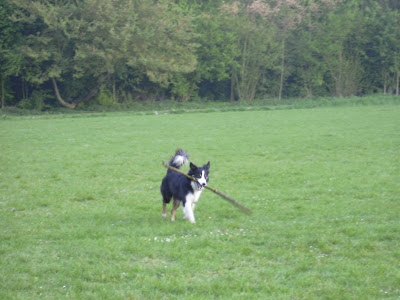 Snarf is a real workaholic, so sheep driving seemed to me the best sport for him. He naturally runs on the 12 o'clock position waiting for a ball. We tried sheepdog training but in the beginning he was not interested in sheep. I know why. I had discouraged him at home to bark at the sheep in the neighbourhood when we walked along, so his interest was lessened.  Once we visited a sheepdog trial and all border collies along the line watched the trial with interest, except Snarf, he sat with his back to the sheep, watching the public......."Please throw a ball". 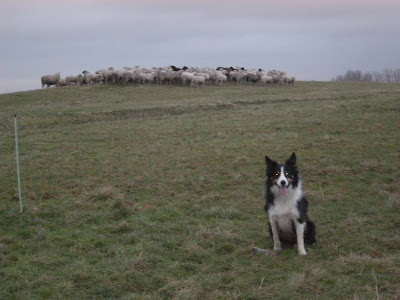 When he was 2 years old we went to agility training. He disliked it from the start and always wanted to go back home.  He often refused to take the hurdles, but the tunnel was his favourite, he took this three times after another.  At last we went in for the exam, I was very nervous because he was the worst of all dogs and that for a smart border collie.  But I think, he knew what was expected from him and there was no interference of a trainer.  We started and he did 14 obstacles faultless with a speed........  He was by far the best and I was thrilled.  No dog was better and faster than Snarf.
I was convinced we should continue the agility sport.  But.........Snarf had other plans.  He really hated to go there and when we arrived home he jumped enthusiastic out of the car, ran to the compost heap looking for a flowerpot and then juggling with the pot in the garden, that's fun for Snarf. 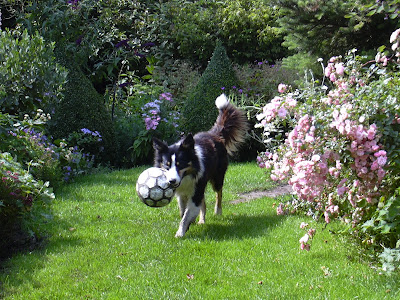 This was the end of Snarf's sportcareer. He only wants one thing:  every morning, by sunrise, at least one and a half hour running, walking and jumping through the woodland, along the riverside, crossing meadows in the recreation area, where his tennisball act as his sheep.
He runs on the 12 o'clock position, I call left, right, straight forward, behind you, steady and lay down.  In the meantime I throw the ball to the mentioned position, he picks it up and brings it  straight to me.  I can send him to every position, like a radiographic navigable car, also from quite a distance. 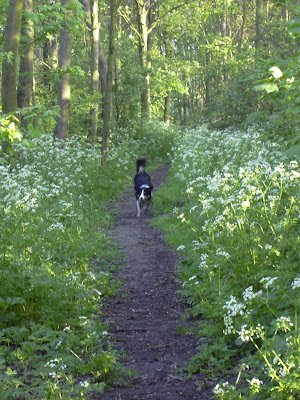 On our daily trips we pass many highlights, for instance seats or dustbins  where we can play hide-and-seek.  When he gets hot he jumps into a ditch and gets out again very muddy and smelly, afterwards we go to the river where he can swim, he is a very strong swimmer and he loves it. 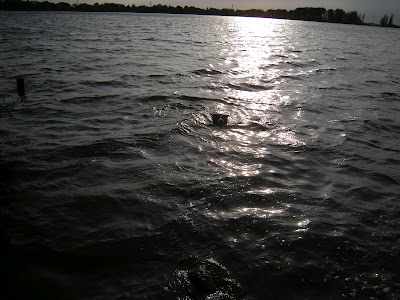 When we come back home, I have to take a rest with a cup of coffee and the newspaper.  Snarf takes the chair opposite mine.  He keeps his eyes at me until I stand up again, then he is immediately on my side and looks at me expectantly :  "What is next on the program today?" He does what I do, and I do what he wants.  It is as if we live in symbiosis.  Inside he attacks the vacuumcleaner or lays on my feet when I am working on my desk.  Outside he throws his toys in my bucket or gardenbasket. 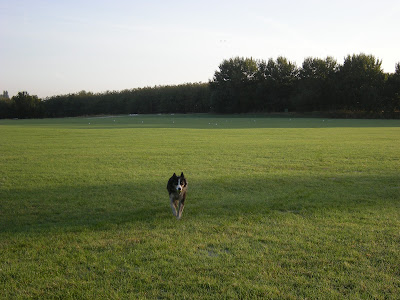 We almost every day play football in the afternoon and when visitors come on the gate, he starts barking but he recognises friends and wants presents.  Ladies with handbags are not safe for him, he pulls them out of their hands looking for presents.  He often gets a toy out of a handbag so.........
In the meantime he has more than 30 squeaking toys which he all knows by name.
Yes, he is a real party animal, which I love unlimited! 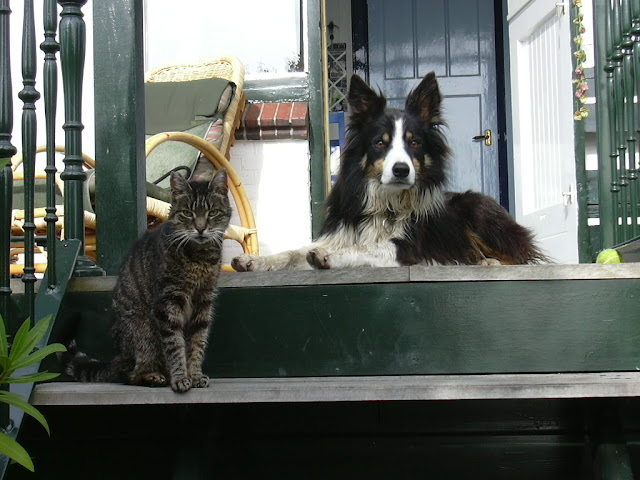